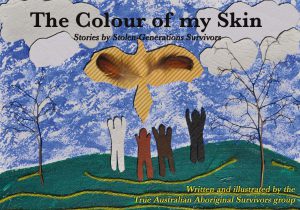 The Colour of My Skin

Plus postage and handling

This book shares some of the Australian Aboriginal Survivors Groups memories of growing up as part of the Stolen Generations. Some are happy stories and some are sad. Each one is offered as a gift to young Australians to remember, learn and heal from our experiences.

This book was made possible through the generous commitment of the True Australia Aboriginal Survivors Group and a strong partnership between Albury Wodonga Aboriginal Health Service and Woomera Aboriginal Corporation.

The group came together over several weeks to create the artwork and text for each of their stories they wished to share with small children. The result is this beautiful book that will live on in the hearts and minds of our further generations — both Indigenous and non-Indigenous.

Aunt Essie — when Aunt Essie was a  young girl she was made to leave her home at Carowra Tank. She and her family walked for days to a place called Menindee. From there she was taken to Cootamundra Girl’s Home.

Aunty Rita — Aunty Rita was taken from Grafton in northern New South Wales, to Bomederry Children’s Home in Nowra and then to the Training Home for Girls, Cootamundra.

Uncle Laurie — Uncle Laurie was seven years old when he was taken from his family in Sydney and place in Kinchela Boy’s Home near Kempsey.

Aunty Avis — Aunty Avis was seven days old when she was taken from her family in Ceduna to Adelaide.

Aunty Betty — Aunty Betty was a baby when she was taken away from her family at Lake Tyers. She first was taken to Melbourne and then to Barnawartha, near Albury/Wodonga

Sherrelle — Sherrelle was six weeks old when she was taken from the Salvation Army Hospital in Sydney to Albury/Wodonga by a family that adopted her.