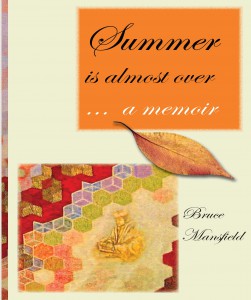 Summer is Almost Over

From the back cover.

The internationally acclaimed literary and television critic Clive James once said that Bruce Mansfield’s famed lectures on Reformation history to Sydney University first-year students were ‘so condensed that to miss one was to write off a month’s work’. Summer is almost over is a highly personal account of the ideas that stood behind that course and its successor at Macquarie University, spanning a quarter of a century (1952–76).

Beginning with the years of desolation and uncertainty following the Second World War and the first stirrings of possibility and hope at the 1947 Oslo Christian youth conference, this revealing memoir covers Mansfield’s emergence as one of Australia’s finest historians of religion drawing on his experiences at school and university, and later as a lecturer and professor. The narrative evokes the educational idealism of the fledgling Macquarie University which attempted to deepen learning opportunities for students.

Later chapters chart the fortuitious origins of his widely recognised and highly esteemed work on the ways in which the Dutch Christian humanist Desiderius Erasmus (1466–1536) has been interpreted across the centuries, culminating in a celebrated trilogy published by the University of Toronto Press.

From his position as Deputy Vice-Chancellor of Macquarie University, Mansfield shows himself to be an astute observer of the changing mood that swept through Australian universities in the 1970s and 1980s. As many edged towards confrontation and fragmentation, his own clear commitments to the liberal humanist ideal of the university and the validity of history as a way of recollecting the ‘worlds we have lost’, deserve to be the subject of close and continuing attention among those concerned with the current state of intellectual life and the future prospects of critical inquiry.