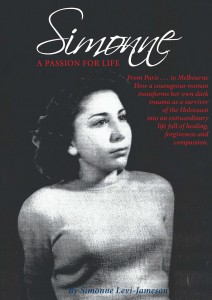 View Gallery
In All Books, Biography, and  Featured

Simonne, a passion for life

From Paris . . . to Melbourne. How a courageous woman transforms her own dark trauma as a survivor of the Holocaust into an extraordinary life full of healing, forgiveness and compassion.

‘Simonne –  A passion for life’ is the true story of a young girl who spent three years in the cellar of the Paris National Library during World War II.

Paris, September 1944. Paris is free again. A kind-faced policeman carries an emaciated Jewish girl from a cellar. Her name is Simonne Levi, and for the past three years she has been held prisoner by police commissioner George Boucher. Raped. Abused. Never shown the light of day. She is 15 years old.

But that is only the beginning of Simonne Levi’s story. Over the next seventy years, she will marry four times, bear four children and adopt a fifth, travel to North Africa, from Casablanca to Tunisia, Switzerland, Spain, Italy, England, The United States, and Australia. she will meet Carl Jung, Pablo Picasso and Salvador Dali, battle the Swiss legal system and become a leader in the treatment of abused, handicapped and autistic children. She will investigate lead poisoning in children and make powerful enemies, lose her house, her practice and her livelihood. She will find redemption in the strangest of places, and in the end she will discover that for all she has been trough she has no regrets, and life is beautiful.

This is the incredible true story of an inspiring woman who is still very much alive, and still working as a psychologist in Melbourne.

The book is illustrated with 41 black and white photos, many of which are historic photos from Paris taken during World War II.

My story is a little complicated.

I have been married four times, jailed twice, and imprisoned in a psychiatric hospital. I have been pregnant six times, have given birth four times, and I have been raped countless times. I have known Carl Jung, Pablo Picasso, Jean Paul Sartre, Jean Cocteau, Salvador Dali, and the ring conjuring mystic Sai Baba. I have lived in every arable continent of the world and I have been a secretary, a performer, an art curator and collector and a psychologist. I am a Holocaust survivor, and yet I have never seen its death camps. My name is Simonne and this is my story.