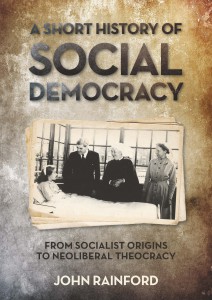 View Gallery
In All Books, Australian History, and Politics

A Short History of Social Democracy

from socialist origins to neoliberal theocracy

The high point of social democracy’s attempt to civilise capitalism came with the post-World War II social settlement of full employment and the welfare state.

For all that it was able to achieve in social policy, union growth and rising incomes during the 1950s and 1960s, it was all over in the mid-1970s.

By the 1980s, social-democratic parties around the world had enthusiastically embraced the economics of neoliberalism which reversed the immediate post-war gains of the working class.

This has resulted in increasing inequality, increased unemployment and underemployment, and a return to the economic crises that had plagued the world economy prior to the Keynesian redistributive economics that underpinned the welfare state.

A Short History of Social Democracy charts the history of the doctrine from the birth of socialist thought in the 19th century and examines its surrender to neoliberal theocracy before suggesting what might constitute a transforming politics capable of meeting the economic and climate-change challenges of the 21st century.

John Rainford is a former union official, a member of the Communist Party of Australia from 1971 to the late 1980s and a member of the New Left Party. Since joining the Socialist Alliance in 2012 he has been a regular contributor to Green Left Weekly and an occasional contributor to Links International online magazine. His previous books include Politics and the Accord and Consuming Pleasures: Australia and the International Drug Business. John was part of the collective that made the documentary film Touch One, Touch All and was scriptwriter and co-director of the recently released film Radical Wollongong.