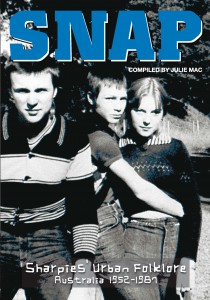 View Gallery
In All Books, Australian History, and Biography

SNAP sketches the timeline of a lost Austalian sub-culture, the teenage Sharpie gangs. Tough and stylish, the Sharpies created their own diverse family, where mateship and defiance were valued over race, colour or authority. SNAP is loaded with photos, snippets from the internet and first hand recollections from former Sharpies and observers.

‘Snap is an imaginary discussion between a shit-load of people from all over the place, a gathering of voices and personalities in different stages of middle age brought together to create a social history that no single memory can hold, or remember. Snap is also the most comprehensive account of the original sharpies of the mid to late sixties, a scene that is only touched on briefly by James Cockington in his history of Australian rock music Long Way to the Top (2001). Arrogantly I thought that sharpies were a distinctly Melbourne thing, till friends like Sam Biondo, Rebecca Maclean, Nazz Oldham and Tait Brady put me straight. The Crevelli boys and West Heidelberg sharps have a lot to answer for in the body-beating of my street psyche. Eastland? Never even knew where it was at the time. All the mean streets in East Preston led to one place, and that was Northland. We are collectively recovering, then, more varied and detailed memories of what Sam Biondo has called a “forgotten” era on his “Skins ‘n Sharps” web site.

Julie’s pugnacious, no holes barred selection of personal stories from various social media discussion groups is organised with the polite enthusiasm and inclusive enthusiasm of Mr Frank Conte, obligingly making cardies in his Thornbury Continental knitwear shop for whoever came from wherever around town. She is not taking sides, not being divisive, just telling it like it is and letting different voices speak for themselves. She avoids rubbernecking over old turf or footwear wars that frequently strut into the recollections. She fills important gaps in the largely neglected memories of sharp in Sydney, Adelaide and Brisbane. And if that’s not enough she recovers the history of the word sharp itself, dating it to the 1950s and the beginning of a uniquely Australian attitude to style as a marker of suburban identity. Julie’s “pedigree of the Australian” sharpie is the most accurate we have yet, a family tree forged out of the stoushes, bickering, jealousies, style, ethnicity, sound, moves and one-up-man ship of which suburb, even which city, was the real deal, the authentic home of sharp. Reading Snap is like eavesdropping on a reunion, maybe even an impossible one, a meeting of the clans happy to forget being jumped at Flinders Street Station or a nasty touch up at an AC/DC concert. Well, for a time anyway. While largely about the fun and rascality in Melbourne in the 60s and 70s, it riffs a vernacular style of designer violence, rhythm and blues that was quintessentially Australian.

Julie Mac is the vernacular storyteller of sharp, listening to what everyone has to say and knitting a crazy striped quilt of raffish bits and pieces that anyone can relate to, remember and hear a bit of themselves in. She doesn’t take sides and vividly recalls the grunge, boredom, nastiness and good times of living in Australian suburbia years ago. Well Jules, as “Noel” says in the discussion group Slackbastard, “such fond memories you have brought back”. Rock on.’