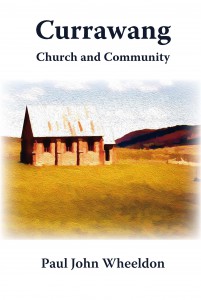 View Gallery
In All Books, Anglicanism, and Australian History

There is little remaining physical evidence of the once thriving community of Currawang north of Lake George in the Goulburn district. From an area sparsely settled by pioneer graziers and their families, the opening of several mines in the 1860s multiplied the number of residents and led to the establishment of a small village with businesses, a school and St Matthias’ Church. When the mines closed in the late 1870s, many of the newcomers drifted away and Currawang was again a predominately grazing area.

Paul Wheeldon, whose forebears were among the earliest settlers of the area, has produced the first comprehensive history of the Currawang community and its only remaining public building — the St Matthias’ Anglican Church. Based on extensive research of the original records and contemporary newspaper accounts, this carefully written account of the rise and decline of Currawang as a rural settlement will attract anyone with a general interest in the Goulburn district and a particular interest in the families who made their home in the rolling plains that overlook the picturesque Lake George. Paul documents the names of those interred in the burial ground and provides short biographies where fragments of life stories survive in printed material.

This book also adds significantly to our knowledge of Anglican mission and ministry in the Australian hinterland. Published to coincide with the 140th anniversary of the opening of St Matthias’, this book is set to become the standard text on the social and spiritual life of Currawang.

PAUL JOHN WHEELDON has a lifelong interest in history. His family were residents at Lake Bathurst in 1837 and at Currawang in 1841 before settling at Goulburn in 1908. Paul was born at Goulburn in 1952 and attended Bourke Street Public School and Goulburn High School. He spent much of his working career in the tertiary education sector as an administrator at the University of Sydney and the University of London. He completed a Certificate in Family History with the Society of Australian Genealogists in 2011. He currently lives at Penrith but travels frequently to the Goulburn district to visit family and friends.