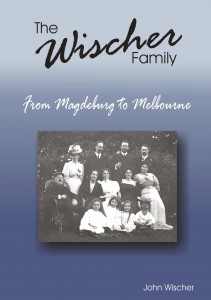 View Gallery
In All Books, Australian History, Biography, and  Featured

From Magdeburg to Melbourne

This is the story of the Wischer family. The founding couple emigrated from Germany to Melbourne. The family built a successful phosphate and chemical business in the Melbourne suburb of Yarraville, and lived in Hawthorn. The story is a fascinating and revealing account of life in Melbourne in the late 19th and early 20th century with interest far beyond that of the family who is the subject of the book.

A highlight of the book is the reproduction of a diary kept by a passenger in the same ship that the Wischers emigrated to Australia in. The journey took over three months. A number of passengers died on the journey, and a number of babies were born. The travellers endured storms, injuries, broken equipment, and numerous other privations. The diary provides a priceless insight into what our forebears endured and makes riveting reading.

From the foreword by the author, John Wischer.

This story of the lives of Wilhelm and Marie Wischer, founders of the Wischer family in Australia, is the result of extensive research of various public records, including books, archives, church records and libraries. These sources are acknowledged at appropriate points within the text in footnotes and references. Another important source of fact has been the first part of the Wischer family history written by Paul Wischer, Wilhelm’s grandson, published in 1990 and titled: The origin of the Wischer family in Australia. Additionally, I am indebted to one of Wilhelm’s great-grandchildren, John David Wischer, for his help in discovering further items of detail, including the pictures of phosphate mining on Ocean Island in 1904.

My major collaborator in this project has been Philip Wischer who researched several topics, assisted in compiling the photographic illustrations from various family sources and supplied valuable details of the musical and artistic life of Marie and Wilhelm when they were living in Hawthorn. A further important contribution by Philip has been his portraits of Wilhelm and Marie appearing in the text.

Artwork for the cover was produced with the generous assistance of Chris Lees, and I am grateful for the initial formatting of the text done by my Glenferrie Rotary Club colleague, Bob Scott, and the final design and typesetting by Katharine Shade of CCE Design.

We have no biographical information about the author.