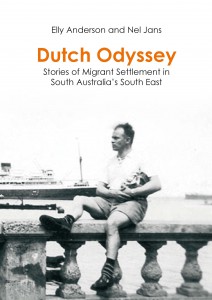 View Gallery
In All Books, Australian History, Biography, and  Featured

Paperback, A4, 242 pages, prolifically illustrated in black and white and full colour

Dutch Odysey is a collective history of Dutch migration, based on the experiences of families who settled in the South East of South Australia from the late 1940s onwards. Nel Jans and Elly Anderson spent five years seeking out stories from first and second generation migrants for this book and expanded their search by scouring archives to complement their collection. The stories are touched by examples of courage, hardship, humour, determination and achievement. Community initiatives and cultural events that evolved to support the newcomers are also documented to provide a more complete picture of this story of the Dutch.

It is an important socio-economic as well as an historical record of the trials and tribulations of a courageous people making a major life transition and risking all for a dream of a prosperous and happy future in a far distant land- Frans de Ryk, Chairperson, Dutch Aged Care NAASA.

A collection of family memories intertwined with the cultural, economic and social history of Dutch people – predominantly post Second World War migrants- to the South East of Australia.  The 40 chapters cover diverse areas, not only family events.  Reading through the stories does give the reader an element of surprise / delight when the mood and/or topic shifts abruptly – Professor Tina Koch member of the Board of Directors NAASA / Adjunct Professor Flinders University.

Accounts that speak of the hardships and astonishing deprivations endured upon arrival and stories of new friendships and the growing appreciation of the optimism, resilience and resourcefulness of their new fellow compatriots – Jeltje Fanoy, Dutch-Australian migrant poet.

At the age of 17, after completing secondary schooling at Mater Christi College, she obtained a cadetship in journalism at the local newspaper, The Border Watch.

She remained on its reporting staff until her marriage in 1967, when she moved to Stirling in the Adelaide Hills. She has  continued to write for a variety of publications since that time.

In helping to bring to print the stories of Dutch migrants in the South East, Elly has found a good number of parallels between their experiences and those of her own family.  For her this pro-ject has been an interesting and  rewarding undertaking that has also evoked many personal memo-ries.

She started as a volunteer for the Skilled Migrants Welcome Project and after it folded in 2013 is still involved in activities for migrants.