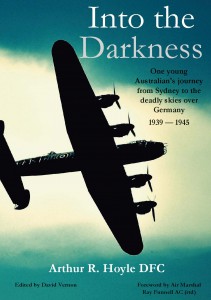 View Gallery
In All Books, Australian History, and Biography

Into the Darkness is the true story of a young Australian thrown into the crucible of the air war over Europe. Navigator, Arthur Hoyle, discovers the excitement, the comraderie and the fear of being part of Bomber Command. Intelligently written, this book dramatically recreates the trials of air crews over the dark skies of Europe — where the chance of surviving the full ‘tour’ was very low. Close to half of all Bomber Command crew who took off into the darkness never returned.

Arthur Hoyle went ‘Into the Darkness’ night after night more than 65 years ago. The story he tells is not dated, it is timeless for it reminds us that we are not perfec; we all make errors . . . However, and more importantly, it tells how good people working together with intelligence and commitment can overcome evitl and establish a better order.

From the foreword by Air Marshall Ray Funnell, AC (Rtd)

This is an amazing book, profusely illustrated with dozens of historic photos. The story of how the book came into being is worth reading.

In 1989, Arthur Hoyle DFC, my second cousin, self-published his memoirs, entitled Into the Darkness, detailing his time as a navigator, serving in Bomber Command during World War II. At the time, he was kind enough to give me a copy, which I read cover to cover in one night and then put away as university exams, earning money and young women took over my life.

Twenty-two years later, my youngest son showed interest in aircraft in World War II and so I dusted off my copy of Into the Darkness and presented it to him to read. He, like me a generation earlier, read it from cover to cover in one night. His enthusiastic response to the book promptedme to re-read it. What a treat. I have read many memoirs and histories of this period, over many years, and yet Into the Darkness was one of the best I had ever read. It wasn’t just Arthur’s keen eye for detail and his fascinating anecdotes, but it was his appreciation of history and his ability to place his experiences into a wider historical context that made his book so appealing. In addition, his literate and readable writing style eased the experience of reading about some of the horrors that confronted young men as they fought to take Europe from Hitler’s grasp

David Vernon is a full-time writer and editor. While he is known for his non-fiction books about birth: Men at Birth, Having a Great Birth in Australia, Birth Stories and With Women, he has turned his hand to writing science articles for newspapers and magazines as well as scribbling the odd short story or two. He established the Stringybark Short Stories Awards in 2010 to promote short story writing. He is currently trying to write an Australian history book. He is a Director on the Board of the ACT Writers Centre. David’s website is: www.davidvernon.net.