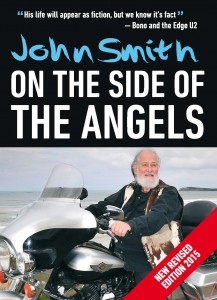 On the Side of the Angels

With the political and social revolution of the hippie era surging around him, he emerged from huge personal upheaval as the long-haired, motorcycle-riding champion of radical Christian faith confronting the needs of a generation sinking into desperation and despair.

During nearly five decades of living on the edge, he has ridden with outlaw bikers, sat with Street kids, consulted with business executives and politicians, debated with academics, nurtured artists, confronted Third World injustice and fostered a movement of risk-takers willing to stand with the marginalised of the world in the name of the marginal Jew, Jesus of Nazareth.

John’s path has been unconventional. Many things he has seen and done can only be described as bizarre. But today he is known around the world as a no-holds-barred spokesman for God’s love and justice.

In this revised edition of his autobiography, John adds new details of the story and includes a special ‘Postscript’ that gives a glimpse of action-filled 28 years since the book was first published with the spread of God’s Squad and associate communities of faith around the world.

The new, long chapter at the end of the book tells the exciting story of the growth of God’s Squad chapters all around the world, particularly in the UK and Europe.

Former Federal Minister for Justice, Senator Michael Tate writes of John ‘I can think of no other Australian who has earned the admiration and respect of so many, in spite of challenging the assumptions and practices of their lifestyles.’

Bono of U2 says of John ‘His life will appear as fiction, but we know it’s fact’.

John’s book can be ordered from:

These days, in early 2015, John lives with his wife Glena a coastal town near Geelong, Victoria. He is a father and grandfather, and is battling (ad currently beating) cancer. He still teaches at St Martin’s Collingwood, a church for the 1%ers. He is currently producing a YouTube series of talks, 20 minutes or so for each on the subject of conflict. They are excellent. find them at https://www.youtube.com/channel/UCGTKkArqZn5YpHT-Lq7eTfw