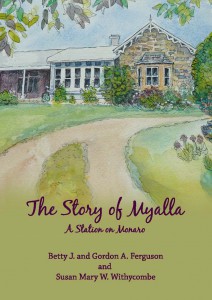 Myalla is a pastoral property in the Monaro district of south-east NSW. It sits astride the region that separates the Murrumbidgee from the Snowy River systems. From this lookout point the indigenous Ngarigo people could view their vast country, extending from the coastal escarpment to the Snowy Mountains, and watch the progress of people from neighbouring countries moving to the mountains every summer to engage in the annual Bogong Moth Festival.

The rolling grasslands of the Monaro attracted white settlers who coveted its rich native pastures for their enormous flocks of sheep. From the 1830s Myalla formed part of the huge pastoral enterprise of William Bradley. In 1872 it became the property of Edward Pratt, Senior Mathematics Master of Sydney Grammar School. For nearly a century Maylla was managed by members of Edward’s family: his brother, his son-in-law, his grandsons. But Myalla was unusual in that for fifty-seven years its owner, and therefore its boss, was a woman: at first it Edward’s widow, then his daughter.

Several other families lived at Myalla — enough to warrant setting up a government school to educate their numerous children. Some were statione employees, others had their own trade or business, or played a part in the story of Myalla. With ingenuity as well as courage they met the challenges of pioneering unfamiliar country, of a climate that ran to extremes, of securing their land against unwelcome “selectors”, of economic boom and bust, rabbit plague, livestock diseases, pasture degradation, and two world wars.

Myalla owners were quick to adopt new technologies – from Telegraph and railways to radio and telephones, motor transport and aviation. They were the first in the district to change from blade to machine Shearing, they pioneered past improvement by means of aerial top dressing. By careful breeding they build up the quality of their flocks and herds.

The story of Myalla reflects social change over four generations, moving from the colonial interpretation of the lifestyle of English country gentry to something more egalitarian. Families have become smaller as advances in hygiene and medicine have made life expectancy longer. Fewer people now actually work on the land, the homestead is now maintained without domestic servants. The human population of Myalla has diminished; but many descendants of its early white-settler families still live on the Monaro.

The story of a particular place has resonances all over Australia.

Susan Mary Withycombe is a teacher, lecturer and writer living in Canberra. Her own family’s pastoral roots and her earlier studies in social history and rural communities have enabled her to respond to the task of editing and completing the story, which was begun more than 40 years ago by Betty Ferguson, the wife of Gordon Ferguson, grandson of Edward Pratt and joint manager of Myalla. Susan Mary has a number of books to her credit as well as being responsible for editing other publications.