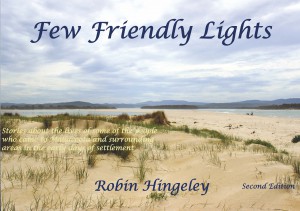 View Gallery
In All Books, Australian History, and Environment

Few Friendly Lights is about the lives of some of the people who came to Mallacoota and surrounding areas in the early days of settlement and who were an integral part of the area’s development.

Many of the places mentioned don’t exist anymore but the people who made the area their life should be remembered for their determination to open up this remote part of East Gippsland to settlement and tourism, and the hardships and battles they faced dealing with the elements. The wind and the floods, which often resulted in miles of paling fences being damaged or washed away; livestock lost and crops being destroyed and with them any hope of a living being made for that year at least, but still having to find the money to pay the rent on their selection.

The battles weren’t just about the elements; their distance from any market, involving many days walking their stock through the bush, over hills and through rivers, eventually made the exercise unviable.  The, at times, regular closing of the entrance to the Mallacoota Inlet made the incoming and outgoing of produce difficult and often impossible.  The wattle bark was unable to be shipped to Melbourne or Sydney and provisions were unable to be brought in; this often didn’t change until they did something about it themselves.  Schooling was another issue and children often spent many winters in a cold, draughty room, unable to be heated because the fire place smoked, and no readily available drinking water because the water tank had rusted.  For a time, Mallacoota didn’t even have a school and when they did finally get one, for years the teacher was shared with Genoa River State School.

Many of the people who came to Mallacoota often moved away, beaten by the difficulties they faced, to try and make a more successful life elsewhere. But if it wasn’t for their perseverance in clearing and improving the land, opening up the good farming areas, and the tourists who came to the area to stay at Lake View hotel in those early days, the area would have remained completely undeveloped.

Many stories were never written down but have been passed on through the generations. Some people may have a different version to the ones told here, but these are as told to Robin; they form part of the local history and as such shouldn’t be lost.  There are many other hard working families who came to Mallacoota in those early days but they haven’t been included in this book as it simply wasn’t possible to cover each one.

Robin Hingeley is a school administrator and lives at Mallacoota with her husband Ian.