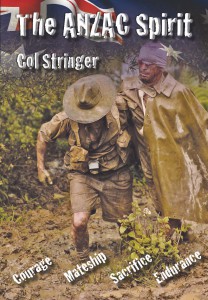 “Of all the allies, it was the Australians who first broke the invincibility of the Japanese army.” (Field Marshall Sir William Slim).

“The battle for the Kokoda Track is Australia’s Alamo. If Gallipoli symbolizes the ANZAC Spirit in WW1, then Kokoda is its WW11 equivalent…..They died so young. They missed so much. They gave up so much: their hopes, their dreams, and their loved ones.They laid down their lives that their friends might live. Greater love hath no man than this . . . (The Spirit of Kokoda).

The Japanese may have lifted brutality to a higher level but it had the reverse affect on the Aussies, it brought out their killer instinct and as later quoted — they proved superior fighters, not only to their Japanese foes, but their American Allies as well.“The performance of the Australian militia, who first faced theJapanese on the Kokoda Track, gradually became the stuff of legend. It is a legend that withstands the hardest scrutiny.” (PaulHam; ‘Kokoda’)

It is stirring to see them [the Australians].. they have the noble faces of men who have endured. Oh, if you could picture Anzac as I have seen it, you would find that to be an Australian is the greatest privilege the world has to offer’ (Phillip Knightley quotingKeith Murdoch, father of Rupert, who wrote from Gallipoli in 1915.Australia: A Biography of a Nation, 2000).

Col Stringer’s unique background of wildlife and humour have won for him the title of “Pastor Crocodile Dundee”. He is also a successful author of 20 Christian books. His book ‘On Eagles Wings’ has become an international best seller and has been endorsed by Joyce Meyer, Kenneth Hagin Jr, Jerry Savelle, Jesse Duplantis, and Kenneth Copeland. His book ‘800 Horsemen’ has also been a best seller.

Col and Jan are being used powerfully to touch their homeland of Australia. Col has spoken at The Great Hall in Federal Parliament as well as Parliament House Brisbane and Sydney. In 2004 Col had an earned doctorate conferred upon him by a University in Florida USA in recognition of his research and writings on Australia’s Christian Heritage. He has spoken for such well known ministers as Kenneth Hagin at Rhema USA, Hillsong (Australia) and Joseph Prince at New Creation Church (Singapore).

Col and Jan have a great love for their homeland and believe the Lord is calling them to minister not only in the towns and cities but throughout the Australian Outback, taking hope to farmers etc who have been affected by drought, flood and fire. They have held meetings in small communities where up to 1,000 people (10 churches) have combined to see God move. The Stringers also have a heart to mentor the next generation of ministers and Christian leaders.