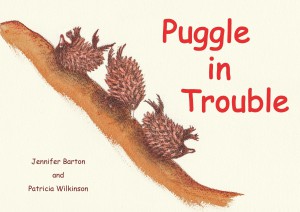 What happens when a baby echidna sets out to explore the world before he is quite big enough to be out on his own? Follow the adventures of tiny Puggle as he encounters a lizard, a feral cat, a fox, a spider and some other creatures that dwell in the Australian bush, before his mother finds him.

A baby echidna is called a puggle. The female echidna curls up and lays a tiny egg into her backward facing pouch. After ten days, the puggle hatches. It’s blind and hairless and around 1.5cm (the size of a jelly bean). The puggle stays in the pouch and clings to its mother’s tummy hair as she waddles along fossicking for ants and termites. The female echidna has milk glands that form a milk patch on her tummy instead of a nipple.

At around eight weeks, the puggle has grown too big for the mother’s pouch and its spines are starting to show. The mother then leaves the puggle in a burrow where it sleeps most of the time while its mother is out foraging for food. She returns every four or five days to feed the puggle. After about seven months, the puggle is weaned and is big enough to leave the burrow.

When an echidna feels it is in danger it uses its powerful claws to dig into the ground or, if the ground is too hard, it will curl into a ball. Its spikes protect it from its main predators — foxes, wild pigs, goannas, and feral cats and dogs — but not from cars, which are the biggest threat to an echidna’s survival.

In this story, an independent little puggle leaves the nursery burrow before it is quite big enough to look after itself.

‘Puggle in Trouble’ is the second picture book that Jennifer Barton and Patricia Wilkinson have published. The first is ‘Wombat Pooh’ (2012). Excursions into the bushland surrounding Wee Jasper, a village situated about 50k south west of Yass NSW, inspired both books.

Jennifer Barton (author) and Patricia Wilkinson (illustrator) live in Canberra. Jennifer is the author of “You Can’t Eat Scenery”, a history of Wee Jasper, a small hamlet on the banks of the Burrunjuck Dam to the west of Canberra.