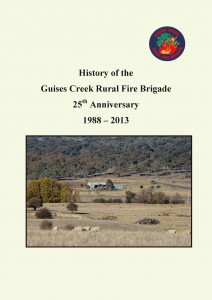 View Gallery
In All Books, Australian History, and Environment

It’s been a long time since the first Bush Fire Brigade was established on the Limestone Plains in 1903. Who would have thought back then that in the year of Canberra’s 100th birthday the ACT would have one of the most modern and comprehensive bush firefighting capabilities of any jurisdiction in Australia. And who would have envisaged the growth of volunteer brigades in the ACT and the impact they have had on the safety of the citizens of Canberra over those years.

The birth and the journey of the ACT’s bushfire brigades has been well documented over the century, through the fires in 1939, in the ’50s, the ’70s, the ’80s, in 2001 and of course the devastating Canberra Fires of 2003. Throughout this journey, the Williamsdale Brigade played an important part of that history, and through its roots, the Guises Creek Volunteer Bushfire Brigade was born, being formally established in 1988.

Guises Creek has always been a brigade that epitomizes the spirit of volunteering. To be a “true blue” member of Guises, you need to put in the effort to involve yourself in all aspects of volunteering. And when you do, the reward is amazing. I joined the Guises Creek Brigade in 1995, just a year after the official opening of the Guises Creek Volunteer Bushfire Brigade shed. A friend recommended it to me and I was keen to join because I’d experienced bush firefighting when I was in my late teens, living in Cooma in the early ’70s, and I really wanted to put some time back into the community.

My volunteer years at Guises were fantastic. I worked my way up to a senior firefighter (as they were called then), and spent 3 years on the Executive Committee. The camaraderie was incredible. The family support was amazing, and the sense of being part of such a group of dedicated and unique people was very rewarding. We all got stuck in with our training and spent hour after hour practicing our hose lays; pumping and drafting; initial attack; first aid; burn over procedures and the list goes on. We got sick of it, but the practice we put in meant that we were competent and confident on the fireground and it was needed because we went to lots of fires in those days. We even got on well with the urban firies and the forestry blokes!

And between all of this there was stand‐up, where we spent a lot of time sitting around waiting for that elusive fire call. But that didn’t stop us from enjoying our time at the shed ‐ I have many fond memories of playing cricket in the shed on those hot summer days, of having water fights to try and cool down, and hugging around the gas furnace in the winter during training. It was a truly satisfying experience, and it’s one that I now recall to new recruits when I talk to them during their initial training.

But where Guises Creek excels is the way in which everyone is welcomed into the brigade. Guises Creek is one of the most family friendly brigades I’ve ever seen. It caters to, and cares for all family members. There’s the Christmas party, social gatherings, birthday parties and the legendary trip to the coast at the end of the fire season.

I could go on and on, but on behalf of all the RFS staff, I’d like to take this opportunity to say thank you to the Guises Creek Brigade. Thank you for your ongoing commitment and dedication to the ACT Community. Thank you for the thousands of hours you put into training, stand‐up and community events. Thank you for the last 25 years and thank you for continuing to be a brigade the RFS can rely on and be proud of. I hope everyone enjoys reading this book and reflecting on their time with Guises Creek and wish the brigade all the best for the next 25 years.

The author / editor of this magnificent book, Gary Mayo from Wanniassa, a southern suburb of Canberra, is a particularly self-effacing man — there is virtually nothing in the book to give a clue to the fact that Gary laboured way beyond the call of duty to bring this book to birth, so I regret that I am unable, at this stage, to provide any more information.