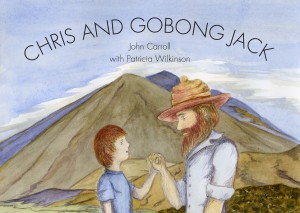 View Gallery
In All Books, Childrens, and  Featured

Chris and Gobong Jack is the story of a little boy who lives in a small village in the high country of Victoria, near Mount Bogong. Chris had a dog, a cat, a cow, a horse and a goldfish. He used to say good night to each of them, and of course good morning the following morning.

When there were no animals, Chris went to speak to Sergeant John the policeman, who began detecting. His suspicions fell upon Gobong Jack who lived a lonely life in the high country, and who turned out to be the culprit. Read the book to find out about the happy ending.

Mount Bogong — that’s Bogong, not Gobong — is the highest peak in Victoria, at 1986 metres. It is part of the Great Dividing Range that runs from the north of Queensland along the east coast of Australia and curves into western Victoria.

In the 19th century Bogong and other parts of the Victorian high country were the haunt and refuge of bushrangers, including Ned Kelly and his mob, and Mad Dog Morgan, and Harry Power (for whom Powers Lookout is named).

There really was a Bogong Jack, a horse and cattle thief who wandered the Australian Alps in the 1850s. He was known as “The Gentleman Bushranger”. History says he never killed anybody.

To the present day the high country is still a place of peace where bushies, men and women both, can live a solitary although sometimes lonesome existence.

About the author and illustrator

John Carroll is a Canberra based author. He writes “The inspiration for this book was a bedtime story I made up for a very young Chris who, while holidaying in Bright during the summer of 1988-1989, had some difficulty pronouncing “Bogong”, which is significant to this story. Now, many years later, and with lots of help, I have re-made that oral story into this book for Chris to remember, and also for my grandchildren Rana and Cian to enjoy.”

Patricia Wilkinson is a Canberra based illustrator, who has illustrated two other children’s books printed by KainosPrint — Wombat Pooh and Puggle in Trouble.