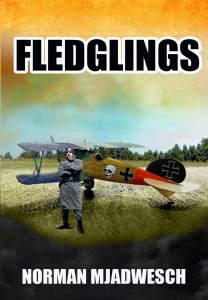 View Gallery
In All Books and Fiction

A novel around the emergence of aerial warfare in WWI

When the Great War began, powered flight was seen as a novelty with no practical military use. As soon as it was realised that trench warfare denied the cavalry the ability to outflank the enemy, the task fell to aviators to perform reconnaissance by flying above the battlefield. It did not take long for everyone to realise that these machines needed to be stopped, and thus began an arms race of epic proportions. In just a few short years, aircraft were commonplace and no longer a novelty — air power had forever changed the face of modern warfare.

Fledglings is a novel that follows a cast of characters throughout this era of mass destruction, in a war that claimed close to twenty million lives. It explores many aspects of aerial combat — from the trial and error of equipment and tactics, to the varied personalities and their interactions with a world in turmoil. Regardless of temperament, there are occasions when one man may act with compassion, and the next day mete out horrific brutality. Acts of greatness are often simply a matter of perspective. War is a lottery, and its outcomes are not decided by concepts of honour or worthiness.

This is an epic, riveting, beautifully crafted novel.

The author writes about his motivation to write this book.

I am unable to identify the time when I first realised that I wanted to become a writer, though I was certainly young. In the same vein I also knew that for most who shared the storytelling dream the goal would probably remain unfulfilled — to present your ideas to a publisher and expect them to welcome you with open arms is the surest path to set yourself up for a fall. Given that it is such a cut-throat industry I felt that my best bet would be to do something completely different — in effect to reduce the field with whom I would be competing by offering up something that others were not.

I had always been good at maths (though this may not have always been reflected in my grades at school) and I was often complimented on my creative writing. Coupled with an interest in history and also a teenager’s fascination with military hardware and dice games, it seemed a natural step to combine everything into a single project. Unfortunately, the internet was some way from being invented and much of my R&D involved horrific levels of trial-and-error — very character building, I’m sure.

The first book that I wrote was not one you’d expect to find in mainstream bookstores. It was aimed at a very niche market — one that certainly had a larger following before the advent of the internet and the mass availability of digital games. After many years of research and experimentation I managed to develop a scaled reconstruction of WW1 air combat based on a mathematical algorithm that I had devised which measured aircraft effectiveness in terms of the following known values: maximum speed, fuel load, weight, dimensions, ceiling, weapon data, production numbers and period of distribution. The results of trials of Richthofen’s Reign replicated known outcomes and provided me with insights into aerial warfare that I had not previously considered and which I had not read anywhere else.

Other books followed, each with themes deliberately unrelated to each in order to cast a larger net over my potential future readers. Books two to five related to cricket, soccer and Formula One motor racing (the F1 concept was packaged as a game with all necessary accessories including track, dice and cars).

Unfortunately, a lot of people seem unable to see how a book can be a game — it’s one or the other, right? OK, so I may disagree, but at the end of the day marketing is about understanding the customer’s point of view. Maybe they can be won over, maybe not. In the end you just have to give them what they want, and if they want a novel, a novel they shall have!

Fledglings combines elements of my previous works, being written around an enactment of Richthofen’s Reign. Without being tied down too much by the algorithm, I used a lot of the detail from the module to create realistic action sequences. The rest of the book — fleshing out the characters and putting them into an historical setting — ultimately came down to dredging my mind for everything I knew about human experience, and confirming the detail via reputable sources.

Writing is exhausting work. Hemmingway is famously quoted as saying; “There is nothing to writing. All you do is sit down at a typewriter and bleed”. He’s bang on with that assessment, but writing can also be incredibly rewarding. There is no better feeling than realising that you have found the perfect combination of words — words which nobody else in the entire world will discover unless they discover you. In that instant, you are standing shoulder to shoulder with literature’s greatest treasures.