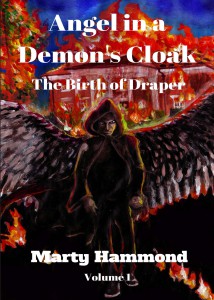 View Gallery
In All Books and Fiction

Angel in a Demon’s Cloak: The Birth of Draper

plus freight and handling

This supernatural crime thriller unearths an unlikely hero by the name of Dennis Draper who discovers he has some very unique gifts. This ex-con, who is visited by a warrior angel while in jail, is then guided through a moral and ethical roller coaster of trying to distinguish the difference between good and evil. During this fast paced novel, Draper is a modern day crime fighter who has to take down some of society’s nastiest villains with the ferociousness of a panther and the velocity of an eagle.

From a review of the book: “What does a man do with his life after spending 16 years in prison? Most people, Dennis Draper included in the past, would re-offend. For Dennis, however, this time will be different. This time, he has an angel on his side.

Dennis’s friends are puzzled by the change in him, but things get even weirder when Detective Kowparwitz tries to discover what happened to the $5 million that vanished when Dennis was sent down. And this is only the start of the weirdness as Dennis’s mentor, Dave, teaches DD how to harness and control the powers inside him. The two set out to hunt and destroy the dark beings and aliens that have infested the Earth.”

Born in Essex, England in 1966, my family migrated to Australia in 1968. Growing up in the sun and surf, as a child I loved participating in sports of all kinds. like all children I had dreams of being a sports star, but at the age of 23, I was struck down with a serious knee injury.

I then had to find a new outlet to express my self and discovered stand up comedy. I enjoyed all facets of the craft and loved to write, perform and promote rooms, but never had the drive to want take it to the highest level.

After years of going from job to job in many industries, I was always drawn to customer service type roles, as I love communicating with people. I worked at the casino in Melbourne for three years, and spent many years driving buses all over the country. My gift for telling stories entertained many of my customers. I was a late starter in creating my family, being 34 when my eldest child was born. I lost my way creatively, as my focus then became solely on supporting my family, till 2011 when my marriage broke down. I then started to find my passion again to create, and started by creating a character on You Tube, and taught myself how to make videos for my channel.

I then had to build a website, and learn how to manage that. For someone in his forties, it was a massive learning curve trying to understand these new technologies, and having to do all the different facets on my own was a mighty feat. I was never able to produce the quality, that someone with more professional equipment would do, but my passion to create and keep learning outshone the lack of skill.I started getting back on stage to perform stand up at some tryout rooms, but found that the part of the process I was enjoying was writing. I began a poetry blog and started posting my poems on it and Facebook. My poetry handle is called Rapid Rhymes. My first attempt at the long form of writing was to put together a script incorporating my videos for the character I created called The Crusty Bus Driver. I tried to sell the manifest as a movie script but will possibly convert it into a book. I took a leap of faith and left a job that I hated, and decided to become an author. Living in poverty, the creative juices flowed. My computer broke down and I started writing the book by hand. With a massive callous on my finger, and getting my laptop repaired, I could have converted back to typing, but I was determined to finish writing it by hand, all 60,000 words. This then become my first book of a series Angel in a Demon’s Cloak – The Birth of Draper