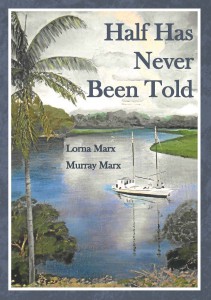 View Gallery
In All Books, Biography, and Christian

Half Has Never Been Told

When the Queen of Sheba visited King Solomon and saw all that God had done for him and the nation of Israel she said, ‘Indeed not even half was told me!’ (1 Kings10:7) I would suggest that not half of Murray’s story has been told in this book nor half of the wonderful way God has worked over his lifetime. But we can marvel at what we have seen.

As I reflected on my own life story in ‘Who Would Have Thought?’ I was left with a haunting desire to get a record of Murray’s experiences down on paper. It has been a most interesting journey.

Murray’s biography is a compilation of history, records and recollections of events that have taken place over some seventy-five years. Memories, together with letters written, especially while in PNG, have been woven together for the account you are about to read.

Some of this may differ from what others have experienced or seen. However we have sought to be as accurate as possible. There are times when appropriate people have been mentioned, but there are many more family, friends and working colleagues of Murray’s who are not named. They are equally important to him.
Murray has met a number of challenges head on, and with the Lord he has triumphed. There is a theme running through the book which we trust you will pick up. Murray’s life has been threatened on a number of occasions but there has been an over-riding sense of protection going with him. Answers to prayer have come in a variety of ways – sometimes through other people, often through the elements, circumstances of the day or from God’s Word.

This story, or record of incidents was written not so much to say who or what I am, but to point to and highlight that the God whom I love has done wonderful things – many of such I consider to have been
miracles. God has done great things for me through Jesus, for which I am so grateful and appreciative. Prayerfully I ask that He will do the same for you.

To quote from two commendations on the back cover of the book.

This book could have been entitled: ‘The Journey of a Country Boy’. Murray Marx grew up in the dairy-farming area of New Zealand called the ‘Waikato’. As a teenager he became a Christian and felt the call of God to become a missionary in Papua New Guinea. This commitment led him into an extraordinary life, first of all as skipper of the Mission launch on the Fly River and later expanding opportunities to serve the people of the Gogodala tribe and his co-workers. When Murray settled in Melbourne he faced the challenges and blessings of being a Baptist minister. On many occasions his life has been threatened and it could well be said that Murray was, ‘saved for a purpose’. His life of service has encompassed anyone in need and has enriched the lives of many both young and old.

Murray Marx is a ‘salt of the earth’ kind of man who has given his life to following Jesus and serving others. He is a very practical man and willing to get his hands dirty. Nothing is too much trouble for him. His pastoral heart for people and his unstinting care endear him to many, young and old. His life has not been immune from significant challenges and each of these he has faced with courage and faith. I value the opportunity to have worked with Murray, in both staff and voluntary capacities, for over 25 years. He is an incredibly loyal colleague and valued friend. The story of Murray Marx is inspiring, and there are many reminders of Jesus in Murray.

Lorna Marx is a retired nurse and lives with husband Murray, a retired missionary and pastor in suburban Melbourne, Victoria, Australia.