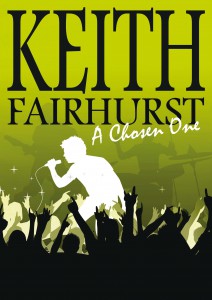 View Gallery
In All Books, Arts, Biography, and Music

Keith Fairhurst, A Chosen One

From the back streets of Manchester, a chance meeting with the British Blues legend leads to Keith’s story.

Follow him through the early Manchester beat club scene to becoming the forgotten group member of Fitz and Startz. Then with The Chosen Few as they make the journey from their Manchester roots into the London club scene and finally become The Hush.

Their music, the clubs and other distractions. Although the lifestyle was frenetic, he went from Rhythm and Blues to Tamla Motown and the music always came first.

The story of a young man caught up in the exploding British music scene was undergoing his own rite of passage in the era that was the sixties.

This is a fascinating, thoroughly revised and updated book, profusely illustrated with numerous historic photographs from the era that Keith writes about. It is especially engaging, indeed riveting reading, for anyone who was a teenager or a young adult during the sixties.

Keith, who was a member of the various bands referred to in the book, now lives in Australia. He is particularly grateful for his sister, Mary, who protected and kept his notebooks, diaries and some remaining photos safe after his mother passed away. He was unaware that Mary had them and that they had survived all these years until she gave them back to him. It was over 30 years since he last saw them.