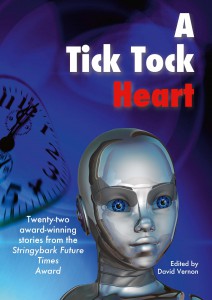 Twenty-two award-winning short stories from the Stringybark Future Times Award will propel you into a world beyond 2020. These stories will delight and intrigue you in this anthology of clever tales from Australian and international authors.

Here’s a taste of what you’ll experience when reading these stories.

Mika was elbow-deep in the torso of an android when the front door hissed open. She set her tools beside the robot carcass and headed for the desk at the front of the shop, weaving around precarious piles of android parts and ducking beneath the wires and bits of robot that hung from the ceiling. There was a girl standing behind the desk. She couldn’t have been older than eighteen, with heliotrope hair and tanned skin, and she was glancing around at the shop behind the desk with a curious eye. “Welcome to Mika’s Android Construction and Repair,” Mika said, leaning on the desk. “I’m Mika. Shouldn’t you be in school?”

— from Not Quite Normal by Amy de Jong

She moves to the window and watches the moon rise, a blood-orange ball balanced on the horizon, illuminating the place where the track first appears. Once, this track had been kept graded for the armies of tourists in their four-wheel-drives, but the tourists don’t come anymore; the fuel is too precious and the wet seasons too long lasting tomake it feasible to repair the roads. It is only possible to approach
by hovercopter or on foot. The breeders always come on foot.

— from No Bigger than my Thumb by Beverley Lello

Charlie stood on the point gazing at the bridge. They said it was nearly three hundred years old and he guessed that it could be true. It had lasted better than the building in front of him, that’s for sure.
That building had once been white, apparently, and concerts and were held within its halls, but Charlie couldn’t picture that having ever happened. For the building now sat like an island in the bay, its sail like shell cracked and brown. Water had long since covered the large concrete steps that led to its cavernous doors and the sea now surged through its corridors, swamping its amphitheatres and washing out the ghosts of times past.

— from The Secret Keepers by Sean Quentin Lee

David Vernon is a full time writer and editor. While he is known for his non-fiction books about birth: Men at Birth, Having a Great Birth in Australia, Birth Stories and With Women, he has turned his hand to writing science articles for newspapers and magazines as well as scribbling the odd short story or two. He established the Stringybark Short Story Awards in 2010 to promote short story writing. He is currently trying to write an Australian history book. He is the Chair of the ACT Writers Centre. David’s website is: www.davidvernon.net.

Ruth Ellison is a user experience designer who is forever curious about people and technology. She spends countless hours people watching, asking a lot of why’s and trying to solve messy problems through good design. She is passionate about creating useful and inclusive user experiences by putting people at the centre of the design. Ruth is also a maker. She’s interested in wearable computing, and makes science based jewellery with lasers and open source technologies through her design label Crankybot. Ruth is a voracious readerwith a particular fondness for the science fiction and fantasy genres. Ruth has previously judged the Stringybark Speculative Fiction Award 2011. She can be found on twitter @RuthEllison or at her website.

Colly Campbell has written poetry, fiction as well as journalism for a few decades now.He emigrated from Scotland to North Queensland as a kid, studied Eng Lit at Uni, and landed his first real paying job as a reporter at that organ of record, the Townsville Bulletin. He moved to Canberra in the ’90s with his family. He’s passionate about words and stories, and for a crust worked in federal politics, government and the media where words and stories abound – tho’ not all of them lyrical. Colin has previously judged the Stringybark Times Past Award 2013.

Fleur Joyce spent her early years as a frustrated sandgroper youth. She petitioned her primary school to allow girls to do woodwork, refused to stand and sing the national anthem (G save the Q) at assembly and got into trouble for being anti-war on ANZAC day. Finally she escaped to Canberra where she studied politics and sociology at ANU and since then worked in social policy. However in all her years as a public servant, she’s cleverly managed to spend half of them at home with her three favourite people and travelling whenever possible. She likes ‘interfering’ in her school community, dreaming of the next house move and of course reading and pondering. Currently working in legislative reform, she looks forward to reading more creative and much much shorter works! Fleur has previously judged the Stringybark Times Past Award 2013.