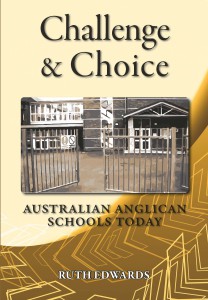 View Gallery
In All Books, Christian, Education, Ethics, and Theology

Although I’ve never been in a private school, I found this book easy and informative to read. If one is allowed to say of an academic tome that the book is a “good read” I found it so! (General reader, ACT)

Just finished reading your book; loved it!   You have really managed to capture the essence of Anglican schools with all their tensions, struggles and joys! (Principal 1, Q’land)

What a well written and researched work. It identifies the key areas that I have struggled with as a parent and now as chaplain at an Anglican School. (Chaplain, country NSW)

I found Ruth’s book thoroughly engaging, thought-provoking, intelligent and beautifully written….This is a complex and fascinating contribution to the Anglican discourse. (Principal 2, Q’land)

Edwards has interviewed principals, chaplains and teachers from a number of Anglican schools throughout Australia, importantly these being from schools of varying backgrounds. This helps give her work an authentic and realistic feel. (Review, The Melbourne Anglican)

These unsolicited comments give an indication of the readability and relevance of Challenge and Choice, which is the first Australian book to focus realistically on Anglican schools as a distinct category which has its own ethos derived from the Anglican church. The Anglican church is notoriously diffuse and multi-faceted. Challenge and Choice gives stakeholders in Anglican schools a concrete understanding of what marks their schools as Anglican, accurately describing the real issues that shape their character.

The book is based in first-hand research in schools and is rich in quotations from real teachers, heads and chaplains. Challenge and Choice is realistic both about the strengths of Anglican schools and also about the ambiguous nature of their religious identity. However, from this hard look at the facts, the book is able to derive positive principles lying within the schools themselves, which are the basis for grasping hold of a common identity and of promoting its benefits in the marketplace.

This is a book for those clergy, chaplains, teachers and parents who have been nonplussed or incoherent when confronted with the question, ‘What’s special about an Anglican school?’ It provides an answer to the teachers who ask each other at conferences, ‘What do our schools have in common?’ Most importantly, it provides a vision as to how Anglican schools can make the best of their unique identity and have an impact on Australian society by doing this. As the review in The Melbourne Anglican continues: ‘In the final two chapters, which I found to be most interesting … Edwards has worthwhile suggestions regarding governance, selection of principals and staff, and the importance of decision-making being made on the basis of Christian principles.’

In the Foreword Bishop Alison Taylor from Brisbane states, ‘Challenge and Choice is an accessible and engaging book, of value and interest to a range of stakeholders, including church leaders, teachers, parents and church members.’

The book deals with three major topics of interest to such people.

Firstly, the initial chapters describe the historical and social context of the schools, in order to help us understand why Anglican schools have developed specific characteristics. These chapters cover:

Secondly, the book explains what Anglican schools have in common and the typical characteristics they display. It considers the importance of the schools’ positioning in the independent sector, examining matters such as business imperatives, client expectations, class aspirations, values and religious activities. A burning question which has never before been satisfactorily answered is what makes Anglican schools Anglican. Challenge and Choice tackles this question with concrete evidence from real Anglican schools and their practitioners. This shows that the ethos of the Anglican church formed through its history does mark its schools significantly. A major factor is the dual social and religious heritage bequeathed to them.

Thirdly, in its final chapters Challenge and Choice presents a challenge to stakeholders in Anglican schools to bring together their Christian identity and their social obligations through consciously embracing an authentic Anglican ethos. It presents an intentional agenda for Anglican schools to capitalise on their double identity. This book suggests that, by being authentically Anglican, schools can be both genuinely educational and genuinely Christian, and thereby honour their educational responsibilities while still expressing a religious identity with integrity. Five broad areas of school life and culture are the focus of some practical suggestions.

The overall positive message is that, if Anglican schools recognise and integrate their social and their religious identities and use both constructively, they can fulfil their potential to bring hope and transformation to future generations of young Australians.

Challenge and Choice was born out of the writer’s lifelong passion for teaching. After teaching in many schools, most of them not Anglican, Dr Edwards realised that she did not really know what might be distinctive about the schools in her own Anglican denomination, and she determined to find out. The first thing she discovered was that many of her assumptions were wrong, and the second was that most other educators also did not know about Anglican schools either.

Dr Edwards began her teaching career as an English teacher at Parramatta High School in western Sydney, a posting she thoroughly enjoyed but which came to an end with the birth of her first child. At the time she was convinced that the time and energy commitment she had for teaching could not be maintained simultaneously with the equally highly demanding commitment of motherhood. In the following years away from full-time teaching, her experience was broadened through perspectives gained by voluntary support teaching, primary and secondary SRE teaching, youth group leadership, school governance in three Anglican schools and being school publicity officer for three large independent schools. In other words, she never really got away from schools!

She completed a Masters degree in Curriculum Studies, which included some individual study units on school innovation and school leadership. These courses required her to interview teachers and this, alongside her governance responsibilities, led to an increasing interest in school management, leadership and organisational theory. In parallel, Dr Edwards’ practical roles in school marketing meant she had many conversations with teachers about the priorities of the school and how events and programs impacted on students and school life.

Her tertiary studies in curriculum and management had now been complemented with wide experience in contract teaching in the social sciences and in religious education across sectors: in Roman Catholic independent schools, Roman Catholic systemic schools, Christian community schools and government schools. This bckground made her an ideal candidate for appointment as Head of Religion and Philosophy at Canberra Girls’ Grammar School when she relocated to the national capital.

During this period she commenced doctoral studies. A Masters unit taken by Dr Kevin Laws at Sydney University on management of educational organisations had aroused her interest in organisational culture which become the focus of her research. The topic evolved as the research progressed, and ended up becoming an analysis of what is Anglican about Anglican schools.

Initial interviews with staff about the culture of their schools yielded results she found surprising. In contrast to previous interviews for publicity or change management, teachers were unable to articulate anything specific about how the religious identity of their school related to its organisational culture. Indeed, even their understanding of religion was vague, being reduced to the existence of chapel services and a belief that Christianity endorsed kindness and pastoral care. Any specific Anglican identity of the schools appeared peripheral to the actual day-to-day culture teachers experienced.

Dr Edwards has said that her curiosity was aroused: “I had a sense from my own diverse experiences across different sectors that there was something in common in Anglican schools. I felt it must be at the taken-for-granted level which determines culture.”

Intentional reading about Anglicanism led to her recognising patterns in the practical events of school life which resonated with descriptions of Anglicanism in non-educational settings. She realised that Anglican schools repeatedly showed multiple tensions, especially around their religious identity.

The demands of doctoral studies meant that Dr Edwards left classroom teaching for a time to focus on research which included site studies of several interstate Anglican schools. She worked part-time in consultancy, running seminars for schools. Her doctorate was awarded by Sydney University in November 2011. The thesis title is Organizational culture in Australian Anglican secondary schools: An empirical analysis of staff experience of religion and school culture and it can be accessed online through the Sydney University digital thesis program.

Examiners of the thesis recommended that it be made known beyond academic circles and Dr Edwards found genuine interest in the topic when presenting formal seminars or conversing informally with parents, teachers and church people.

Therefore, in the years after her graduation, in between paid employment and responsibilities for ageing parents, Dr Edwards has made this research accessible to the average reader by writing Challenge and Choice, Australian Anglican schools today, the definitive and eminently readable book on the characteristics of Anglican schools and how they can intentionally embrace their identity for the good of their students.