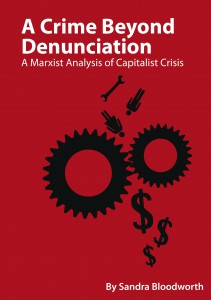 View Gallery
In All Books and Politics

A Crime Beyond Denunciation

A Marxist analysis of capitalist crisis

A Crime Beyond Denunciation: A Marxist Analysis of Capitalist Crisis by Sandra Bloodworth is timely book written at the end of 2008 in the midst of world capitalism heading into the worst crisis since the 1930s.

The works of the roots of the vines, of the trees, must be destroyed to keep up the price, and this is the saddest, bitterest thing of all. Carloads of oranges dumped on the ground. The people came for miles to take the fruit, but this could not be. How would they buy oranges at 20 cents a dozen if they could drive out and pick them up? . . . A million people hungry, needing the fruit – and kerosene sprayed over the golden mountains.

There is a crime here that goes beyond denunciation. There is a sorrow here that weeping cannot symbolize . . . children dying of pellagra must die because a profit cannot be taken from an orange. And coroners must fill in the certificates – died of malnutrition – because the food must rot, must be forced to rot.

– John Steinbeck, The Grapes of Wrath

We live in a mad and dreadful system ruled over by inhumane, hypocritical parasites.

For 35 years capitalists and their supporters in the media and academia stridently asserted that the free market is the most rational way to run society. To a chorus of eulogies for neoliberal individualism and self-reliance, bosses relentlessly attacked workers’ living standards. Then a financial crisis hit the US in September 2008 and major banks collapsed. Overnight all these hypocrites changed their tune. The free marketeers of the Bush administration had ignored the plight of the growing numbers living in poverty, the more than 47 million without access to adequate health care, and children attending crumbling schools. Now they could suddenly find a trillion dollars to fill the coffers of the parasites of Wall Street.

It began with $US29 billion to help JP Morgan Chase buy up Bear Sterns, followed by $US200 billion to nationalise Fannie Mae and Freddie Mac, two of the biggest lending institutions in the US. Then they handed over $US85 billion to take over American International Group, the world’s biggest insurance company, and eighteenth-largest company. This was all topped up by the $700 billion for the very scum who were responsible for the crisis. Soon governments in all the most developed countries were guaranteeing savings held by banks. With every day it seemed that more tens of billions of dollars were promised to fund the losses of banks or to take them over.

The executive director of the Institute of Public Affairs, an Australian free market think-tank and proponent of small government, epitomised the hypocritical thinking of the neoliberals:

“It may be that in some cases pragmatism outweighs principle. If the US financial system and with that the rest of the Western developed world was to, if not tumble then crumble slowly down, in some circumstances there would be justification for bail-outs of these sorts.”

These are the same ideologues who insist that the poor and destitute have to learn to live by their own efforts, not rely on handouts from the state.

Sandra Bloodworth is a labour historian and socialist activist, based in Melbourne, Australia. She has been involved in radical politics since the 1970s, where she has played roles in the women’s, Aboriginal, anti-uranium mining and trade union movements. She is one of the founding members of the Trotskyist organisation Socialist Alternative, in which she plays a leading role and is a co-editor of its publication of the same name. She is also the editor of Marxist Left Review as well as having authored several books from a Marxist perspective on the Russian Revolution, the global financial crisis, women’s struggles, working class resistance in the Middle East and Australian imperialism.