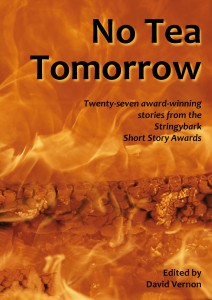 Front and back cover
In All Books, Fiction, and Short Stories

I particularly enjoy our ‘open’ short story awards as they give such an opportunity for authors to showcase the breadth and depth of their writing. This collection is no different with the subjects explored being remarkably diverse. They range from from alternative history through to romance, humour and a bit of horror, but all have a connection to Australia — no matter how small.

By the time I have finished editing a collection of short stories I have read each one three or four times and it never ceases to delight me that I find something new in each story every time I re-read it. Who would think that a story, crafted in just 1500 words, could pack such a literary punch?

This is the twenty-third anthology of short stories from the Stringybark Short Story Awards and it has been interesting to see how the content of stories have changed over the five years we have been running the competitions. For example, in 2010,when we established the awards, even though the Internet was well entrenched in society the web was still new enough in some minds that the Internet was actually was the subject of some short stories. Now it is an integral part of many stories—there in the background and not worthy of specific comment.

While these stories presented here are fiction, each one is a small time capsule for future readers to glean insights into the minds, thoughts and jaunts of writers in 2015. I am sure that the reader of 2115 will appreciate these clever tales just as much as the readers of 2015.

David Vernon is a full time writer and editor. While he is known for his non-fiction books about birth: Men at Birth, Having a Great Birth in Australia, Birth Stories and With Women, he has turned his hand to writing science articles for newspapers and magazines as well as scribbling the odd short story or two. He established the Stringybark Short Story Awards in 2010 to promote short story writing. He is currently trying to write an Australian history book. He is the Chair of the ACT Writers Centre. David’s website is: www.davidvernon.net

Kerry Johnstone doesn’t think that her life will be long enough for all the books she wants to read. At rained high school teacher now working in a primary schoolKerry is witness daily to the joy of words. Fascinated with the process of how we learn to read Kerry watches in wonder as children including her own find the pleasure of books. Kerry believes in living life full throttle and the only time she sits still is to delight in the pages of a book herself. She enjoys reading, sewing and gardening. Kerry has previously judged the Stringybark Young Adult Fiction Award 2012.

Dr Andrew Perry is a physicist with decades of academic and industrial research experience. Fatherhood, apple pie and nine years in Silicon Valley have given him an appreciation of the challenges and rewards of life. He builds billy-carts, surfs and plays music, walks his Border Collie, and reads widely in search of entertainment and new ideas. He has previously judged the Stringybark Short Story Award 2010 theTwisted Stringybark Award 2012, and the Stringybark Short Story Award 2013.