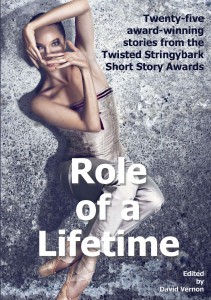 View Gallery
In All Books, Fiction, Mysteries, and Short Stories

Role of a Lifetime

A story with a twist is always entertaining and this collection of twisted tales is no exception. The stories showcased here are the winning and highly commended entries in the Twisted Stringybark Short Story Award.

This is the second Twisted Stringybark anthology, the first being Tainted Innocence which was published in 2012 to great reviews. I expect the same for this collection. This is the twenty-first anthology of Australian and international short stories that we have published and like all our others contains somewell known talent but also new authors.

We are delighted to present them to you for your entertainment. We received 183 entries for this competition and after much discussion the judges chose twenty-five to present to you in this collection.Each story is a little mystery—can you figure out the ending before you get there?

I hope you enjoy these stories as much as the judges, Barry O’Farrell, Margie Perkins, Julia Robertson and I did, in selecting them.

David Vernon is a full time writer and editor. While he is known for his non-fiction books about birth: Men at Birth, Having a Great Birth in Australia, Birth Stories and With Women, he has turned his hand to writing science articles for newspapers and magazines as well as scribbling the odd short story or two. He established the Stringybark Short Story Awards in 2010 to promote short story writing. He is currently trying to write an Australian history book. He is the Chair of the ACT Writers Centre. David’s website is: www.davidvernon.net

Julia Robertson, a lawyer by training, spent ten years working for the Institute of Criminology before resigning to establish her own tourism business down the South Coast. A regular international traveller and voracious reader, Julia suffers from a vast lack of bookshelf space. She has previously judged the Twisted Stringybark Short Story Award 2012.

At the age of 57, Brisbane’s Barry O’Farrell enrolled in drama school. This came as a surprising development to many people, but it was time to explore a creative outlet. The first 20 years of Barry’s working life were spent in Export marketing, involving travel across most of Asia, the Pacific and USA. Barry has appeared in a couple of feature films, TV shows, music videos and short films, but it was the acting experience inspired him to write.To date he has written four short films, and many short stories, one of which he is working up into a feature film script. Barry’s daughter Amy has encouraged, and endorsed, this late blooming creativity in her father.

Marguerite Perkins has a talent for choosing interesting but poorly paid work. This includes childbirth preparation (she has ruined her vocal chords acting out labour sounds) birth support and work with people with disabilities or teaching. Story judging fits the pattern. She enthusiastically consumes novels and short stories and has begun to write blogs of her adventures with cancer and travel. She loves gardening, especially weeding and growing vegetables. If she had one magic wish, she’d use it to remember the words of songs and sing them tunefully. Marguerite has previously judged the Stringybark Humorous Short Fiction Award 2013 and the Stringybark Times Past Award 2013.